Intertextile Shanghai Apparel Fabrics is now the world’s largest apparel and interior textile fair, targeting primarily the Chinese market. It coincides with and sits alongside YarnExpo and Chic creating the world’s largest integrated yarn, textile and apparel event, covering all areas (from a Chinese perspective), from sheep to shelf. The show attracts in excess of 85,000 visitors over the three days. 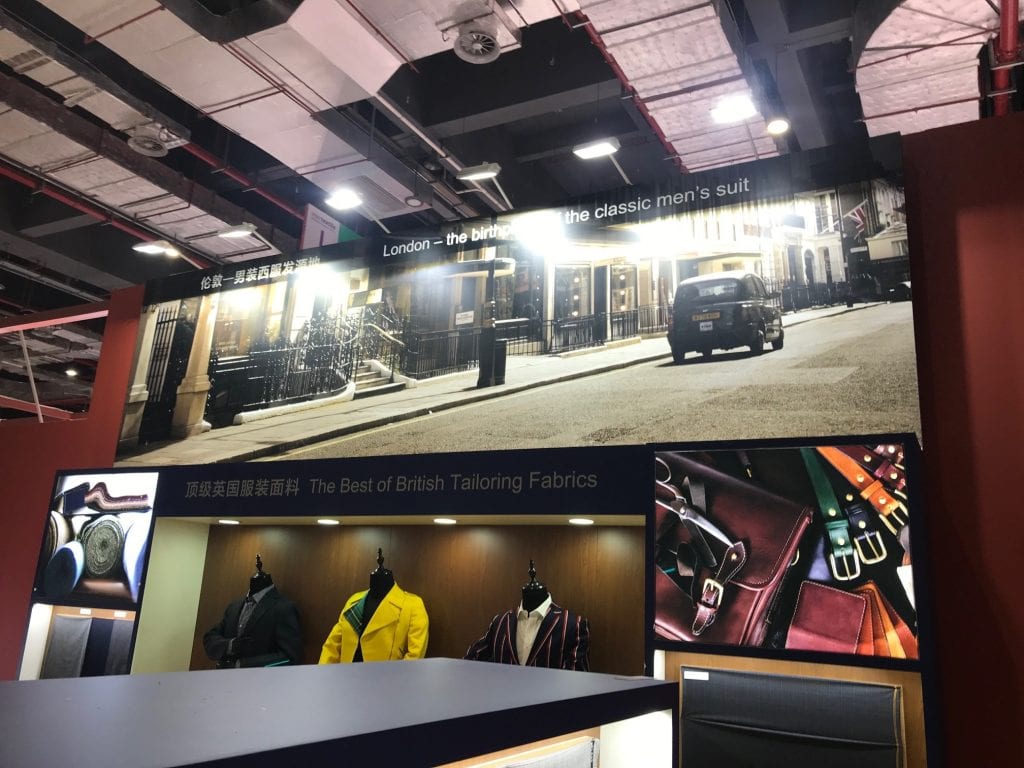 With support from the Clothworkers’ Company, UKFT organised an important British presence at Intertextile in the prestigious ‘Saloneurope’ hall, alongside 15 manufacturers and designers of British textiles. The British worsted textile manufacturers were next to the information stand in the “Premium Wool Zone” with the textile designers close by in the “Verve for Design” area.

UKFT worked with the show organisers to prepare a special Best of British Fabrics stand, with swatches from companies at the show as well as some of those not present. Buyers were also able to see seven outfits on mannequins using fabrics from British mills, inspired by the British colour card prepared for Première Vision Paris. Buyers were able to see the key colour trends which were prepared for UKFT by Beryl Gibson. The stand area also featured innovative images of British cloth and iconic images from around London. 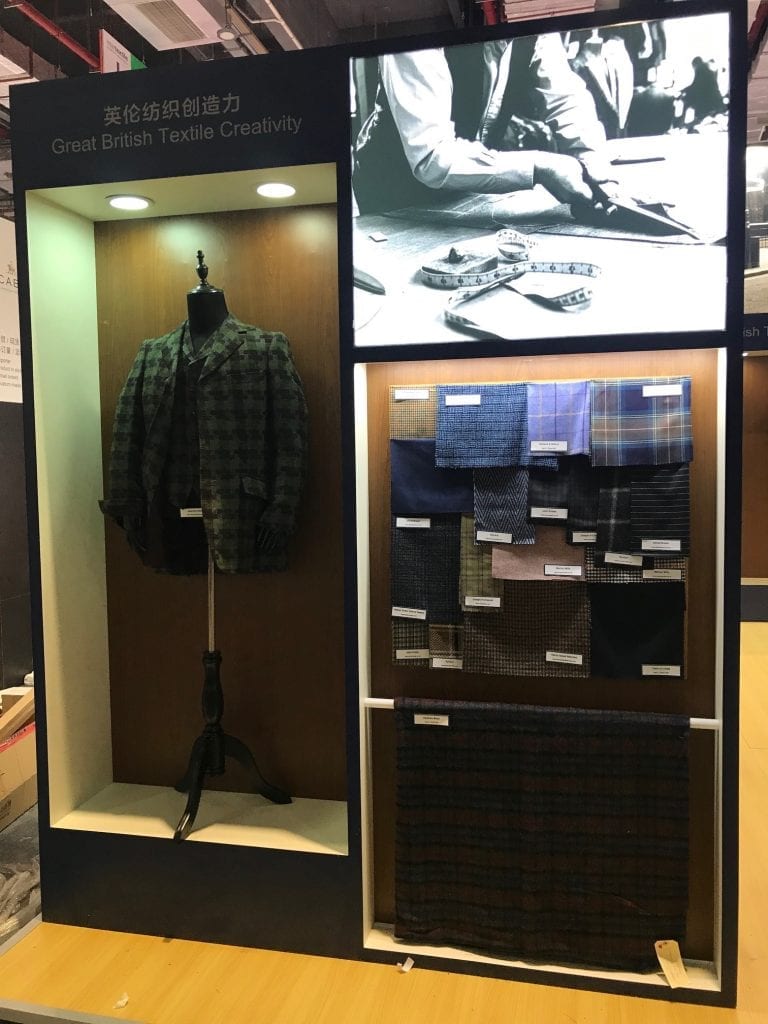 The Best of British Fabrics stand was included on the official press and VIP buyer tour on the first day and UKFT was able to receive and speak to over 120 VIP buyers, journalists and guests. Whilst the main thrust of the event was to target the Chinese market, the activity also led UKFT to meet important industry associations and potential customers from other markets, particularly those located on near China’s Belt and Road network, including: Vietnam, Bangladesh, India, the Philippines and Iran.

UKFT’s messaging for the display and collateral was very strong and direct. All items gave examples of the unique strengths of the UK textile industry, from the UK’s unique heritage to innovation and sustainability. Importantly, the messaging referenced the important fact that the classic British men’s suit originated in the UK, raising the profile of British cloth in the eyes of the audience. This resonated well with the Chinese audience who are always keen to pursue authenticity and provenance who had previously assumed that classic man’s suit originated in Naples! 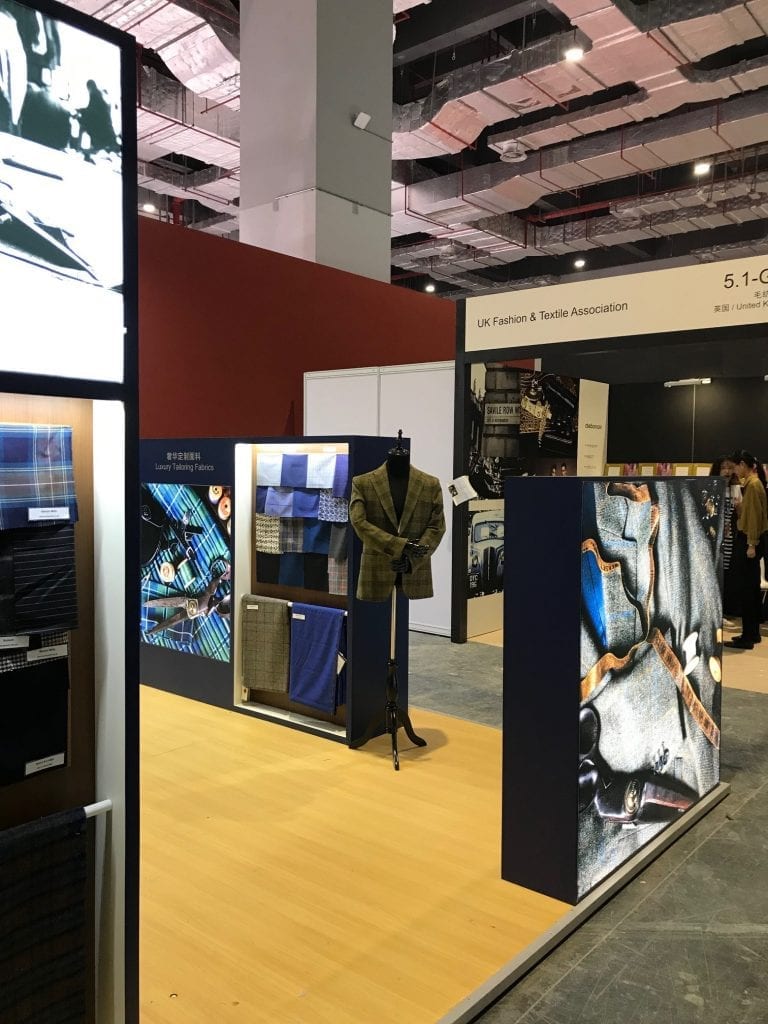 The British exhibitors were delighted with the display and UKFT’s coordination of the group and several of them have asked whether it would be possible to organise similar events in future.

Over the three days of the show, there were an estimated 300 visitors to the showcase stands at the show. Of these, most were looking for textile and trend information and we directed to the exhibitors at the show. A good number (around 50) saw swatches on the UKFT British fabrics trend area and were then directed to the manufacturers or merchants on their individual stands. 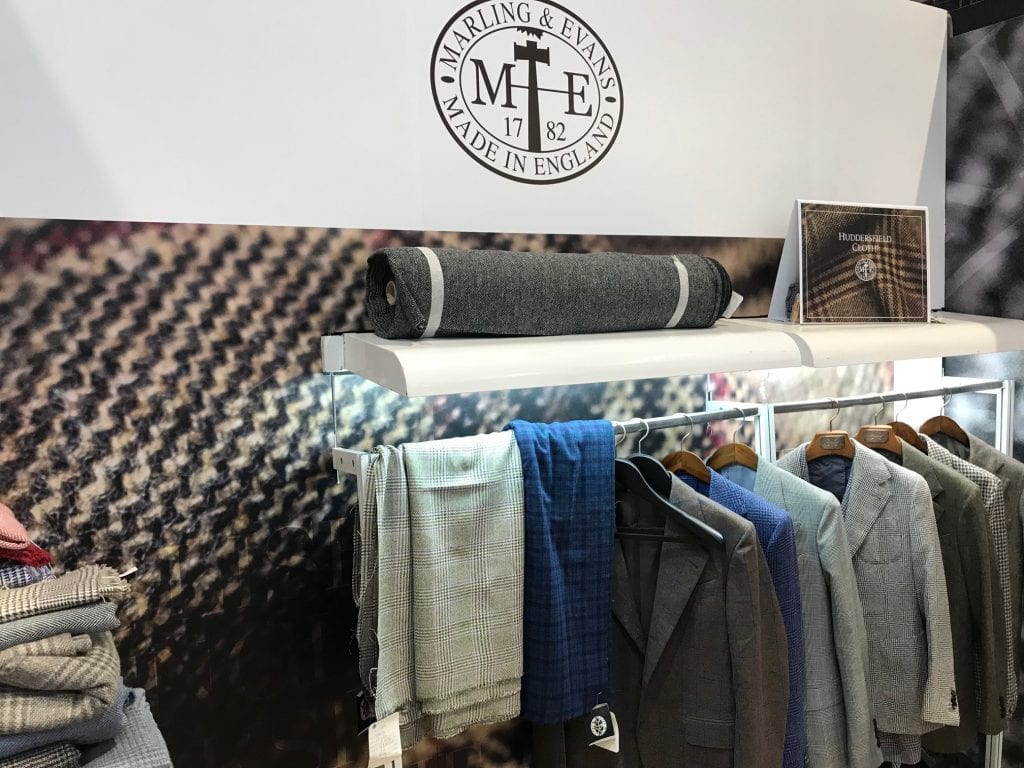 Buyers and press were impressed by the British fabrics display and some of the fabrics, including fabrics not actually present at the show. It was interesting to see how little some of the visitors to the stand knew about specific types of British heritage fabric including Harris Tweed. Overall, the interest tended towards the two extremes of fabric weight (for winter) from warm woollen blankets and scarves to lighter and crisper linen mixes, which are probably more suitable for the Shanghai climate. 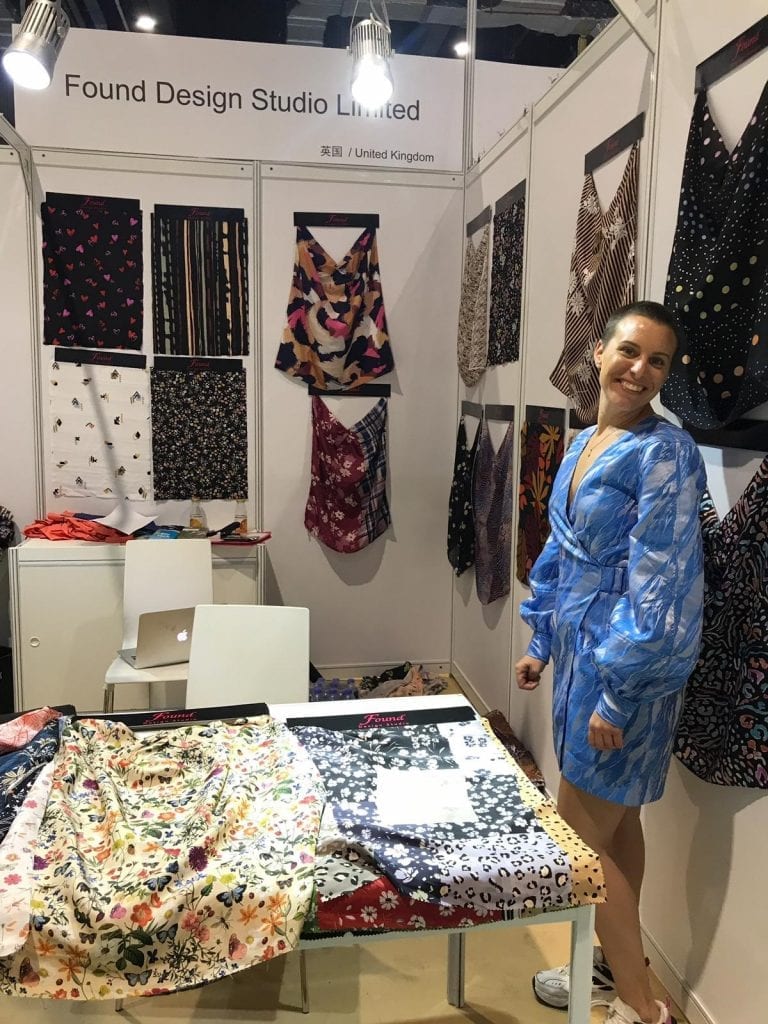 For UKFT this was an important learning journey. The British brands all wrote orders. Most of them had an agent or representative in the market, but the authentic British feel of having British representatives with detailed product and design knowledge was judged to be extremely important. The general feeling was that the show was a good one, even if the number of buyers was down on the previous season. The worsted mills were busiest on the first two days of the show whilst the textile designers were generally quiet on day 1 but much busier on the last day of the show. 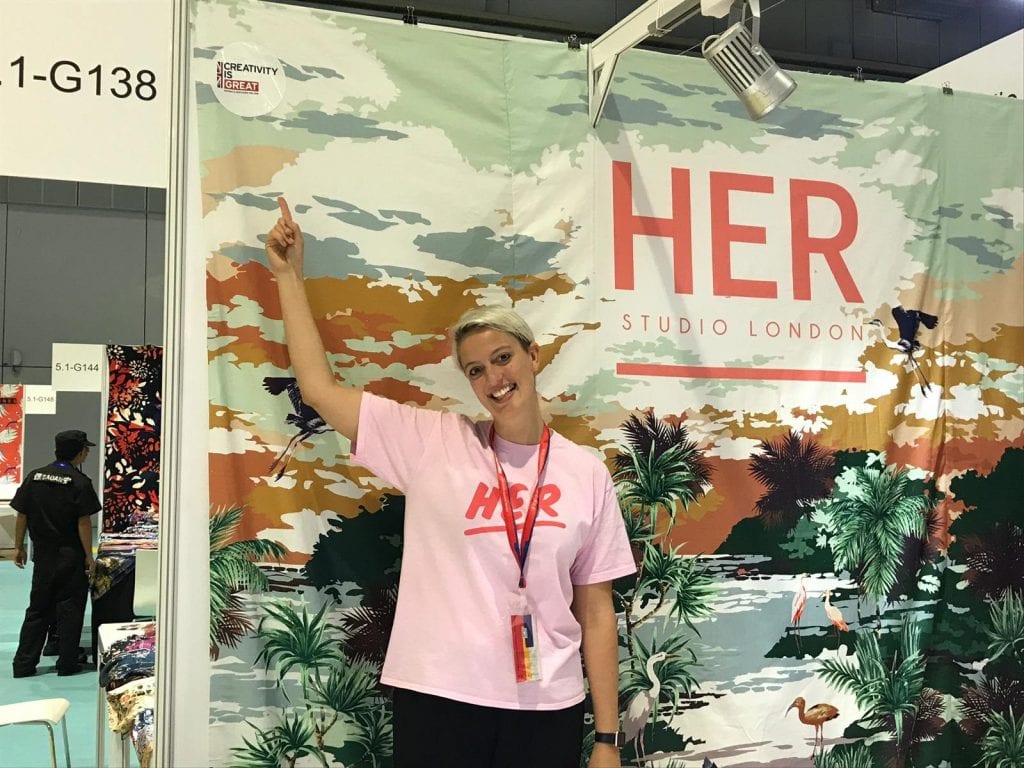 There was much talk at the show about “Sustainability” but in the Chinese and Asian context this term refers primarily to recycling and upcycling, conveniently ignoring other important issues such as ethical manufacturing, working conditions, long distance shipping, use of fossil fuels in production and shipping and the expansionist nature of the Belt and Road project itself. As in the West, major Chinese corporations are using the term “Sustainability” to sell a variety of innovative products with a reduced carbon footprint or recycled technology but they still aim to produce and ship these goods around the world in massive quantities. 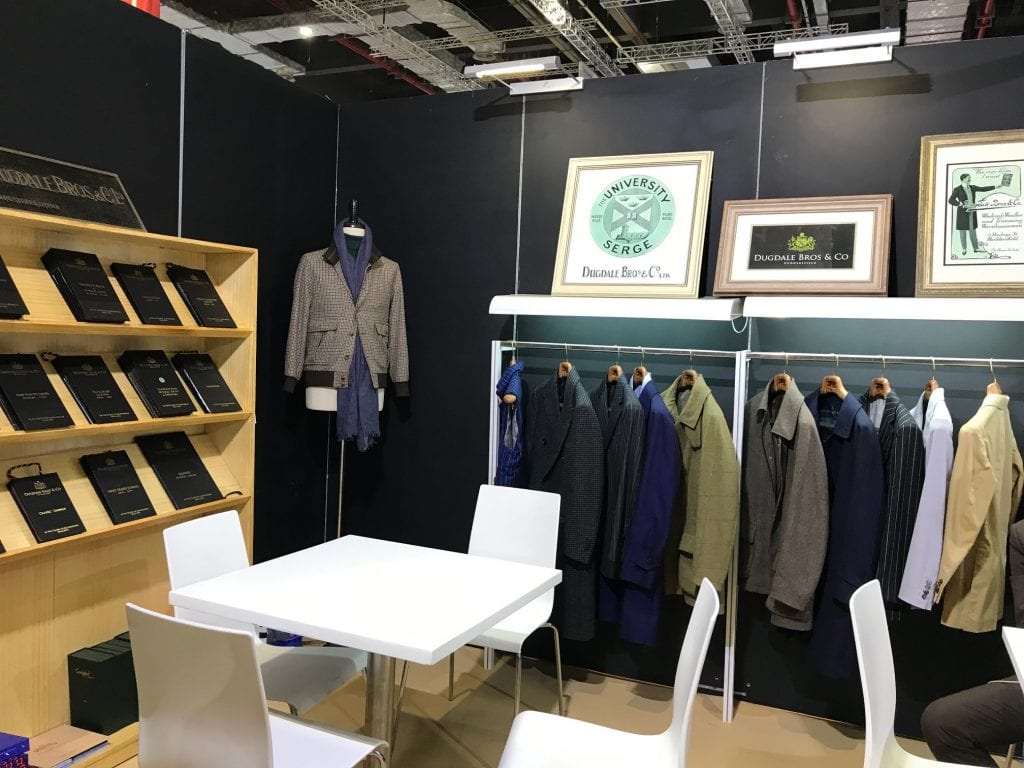 In China, the Belt and Road project is promoted as a mutually beneficial project aiming to bring the peoples of the regions it touches closer together in a mutually beneficial way. Another view, however, is that the project is about expanding and strengthening China’s control of the supply chain outside China now that Chinese production can no longer lay claim to being the “cheapest loom” or the “cheapest needle”. Over the next five years, the Chinese government expects to see a number of smaller Chinese SME businesses close due to competition from other countries along the Belt and Road. At the same time, it continues to invest in loans to countries along the Belt and Road even though some are beginning to find the repayments difficult and come with strings attached. It remains to be seen how a downturn in employment in mainland China will be seen in the context of increasing investment in Central Asia and Africa. And, according to UKFT’s Paul Alger, speaking at a roundtable event in Shanghai: “There may be other challenges for Chinese industry in store as China is still wedded to the notion that the East supplies and the West buys but, as household incomes in the West drop, this too is unlikely to be sustainable in the long term.” 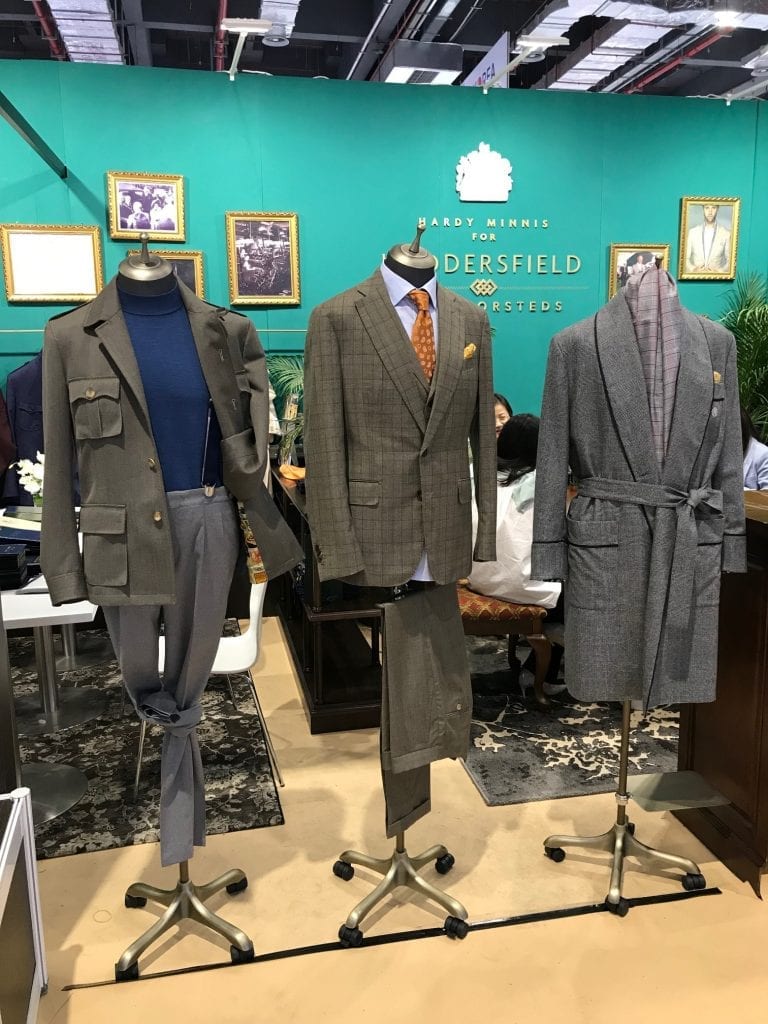 Notwithstanding this issue, it cannot be denied that the Chinese have (unsurprisingly) pulled off a remarkable feat. The world’s largest integrated yarn, textile and fashion event now exists and it is in China. Outside China’s Tier 1 cities, most of the growth appears to be in out of town centre retail malls where there are very few Western brands, if any at all. All are local brands, manufactured to a high standard and generally with good design. China is effectively self-sufficient in all areas from design to merchandising, having learned most of what it needed to learn from the West. Whilst this makes it all the more important for UK textile companies to look to this important market to do business, it also poses a huge challenge for fashion and designer brands as the market for Western products is not as strong as it ought to be. China’s ability to grow, reinvent itself and leapfrog is renowned. China’s appetite for UK heritage goods is currently high but this could change. This is a market British companies ignore or overlook at their peril.