As UKFT’s Laurian Davies receives her Member of the British Empire (MBE) for services to Young Fashion Entrepreneurs and Exporters, she reflects on more than 38 years of helping designers and brands grow their businesses both in the UK and overseas

Laurian Davies, International Business Manager at UK Fashion & Textile Association, has transformed the careers of thousands of designers and smoothed the path for established brands as they embark on export journeys to new markets around the world. She tends to operate in the background as they bask in the limelight of the catwalk or securing accounts in some of the world’s most prestigious shops, offering up her decades of experience in the intricacies and subtleties of different fashion markets and diligently checking customs and export documentation to avoid hefty, unnecessary bills on their behalf.

Now she has been awarded an MBE in recognition of her incredibly valuable work, encouragement and infectious enthusiasm for the fashion industry in helping countless designers turn their passion into thriving businesses.

During her career, she has exhausted four passports and travelled more than 50,000 miles, attending tradeshows, showrooms and trade missions to the likes of Paris, Florence, Shanghai and Tokyo season after season. UKFT is the largest user of the Department of International Trade’s Tradeshow Access Programme funding, which provides grants to companies to help with show costs, and what Laurian doesn’t know about presenting a collection at an event overseas isn’t worth knowing.

Her parents – a fashion buyer at Harrods and the first accountant to Mary Quant – instilled a love of fashion and business, but Laurian embarked on an archaeological degree before taking up a job at Courtaulds in the export department. From there, she joined the Clothing Export Council of Great Britain (which eventually transformed into the UK Fashion & Textile Association as we know it today), where she helped companies – from large manufacturers to fledgling designers – with their export paperwork. 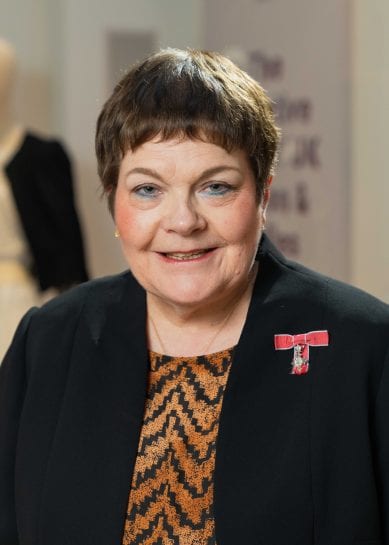 “A lot of the work I do these days is hauling people out of trouble when they have the wrong documentation and product is stuck in customs.”

“Or if they are importing from somewhere like Turkey and they are selling to Norway, for example, and the rules and regulations say that there shouldn’t be any duties involved in that transaction. That’s right but you need to get the paperwork right. If you don’t it will cost you thousands and in a case I dealt with recently, hundreds of thousands of pounds in unnecessary VAT and import duty.”

She says she’s never shied away from getting stuck into things, which she thinks is down to her archaeological training and the fact she likes research.

“I like peeling away the layers of what’s going on and what a law really means in terms of our business,” she explains. “And making a point of interpreting it in a way that people can begin to understand.”

She says a big problem of new people coming into the industry with a fantastic product is that often if it starts trading well, then understanding the paperwork and what the implications are of using certain fabrics or selling to various overseas markets may be can be a herculean task alone, without prior experience. Together with International Business Director Paul Alger, she is there to offer independent advice on anything from accurately working out costings and pricing a collection correctly to protecting your IP, marketing and selling and getting paid.

“I love the fashion side of it – mainly from the point of view of an observer, because I’ve never been a huge fashionista – but there’s no denying that if a designer that you’ve watched grow for a lot of years is on the catwalk and having fun, that’s an enormous buzz. But the clever thing is, is to take that buzz and turn it into business and that’s no easier than it ever was. In fact, I think that’s going to get more difficult [as Brexit looms], which is why this is such an extraordinary time.”

Although she specialises in exports, Laurian’s role increasingly includes offering wider business support on how to position yourself and create a distinctive brand. She has worked closely with jewellery designer Alex Monroe over a number of years, encouraging him to bring his personality into the business.

“It doesn’t always come that naturally to British designers, unlike their US counterparts for example,” she says. “It’s about not being shy about putting your personality across when talking to a buyer or the press, to give them something additional to latch onto, which makes them interested in more than just the product.”

Alex describes Laurian as the “Google of Export”, always ready to answer questions like “Is this a good show to do? Who are these weird customers and are they genuine? What does FOB mean? Can you help with South Korea?”

“For I don’t know how long she’s been our go-to person with quick, concise and helpful answers to anything we’ve thrown at her,” he explains. “I’m quite sure we wouldn’t be where we are today without her support. And always with that cheerful smile and good humour.”

One of her most recent protégés is Alex Beattie, a London-based graphic designer who launched a collection of screen-printed T-shirts and sweatshirts called Horn Please! in March this year. Beattie joined UKFT’s ‘Brits in Paris’ group in September and debuted in Selfridges in October.

“As a new business, I’ve been incredibly grateful for Laurian’s help and encouragement. She’s consistently supportive, positive and a fount of ideas and knowledge. She tells me things and helps me get stuff done! It’s invaluable.”

Laurian is seeing more designers launching their own brands than ever before but says having a fantastic product is just the start of the journey. While ecommerce and social media means it is possible to build a following, the industry is increasingly competitive and sustaining the inevitable knocks along the way can mean it is harder than ever.

“The creativity has to spill over from developing the item into the marketing, selling ideas and even to getting the money in, which is another enormous area to be considered,” she underlines.

“Lots of people get advice from lots of places and I do think we can absolutely say we can give them dispassionate advice, which may in some cases mean saying it’s not developed enough yet as a collection.

“We might have to say you are wasting your time if you do shows overseas, why not try a few of the UK exhibitions to try out whether you can sell. Can you cope with someone fiddling through the whole rail and saying ‘Oh I don’t think much of that’ or even worse, not saying anything at all, and walking away. It can be very disheartening and you have to harden yourself to that.”

She wishes she could shield the firms she works with from all of the problems they may face but she does relish the community spirit of designers overseas, who stick together when the going gets tough. She also loves the pace of the industry, and the creativity of product as well as the approach.

“The business is always changing and will continue to do so,” she concludes. “That’s what makes it fun and that’s why I have stayed with it for all this time.”

“The business is always changing and will continue to do so. That’s what makes it fun and that’s why I have stayed with it for all this time.”