Kalopsia Collective was founded in Scotland 2012 by Adam Robertson and Nina Falk as a textiles artist collective. Today Kalopsia supplies a range of clients from start-ups to luxury brands with high quality, ethical and sustainable accessories and apparel from their standardised product collection ‘Assemble’. 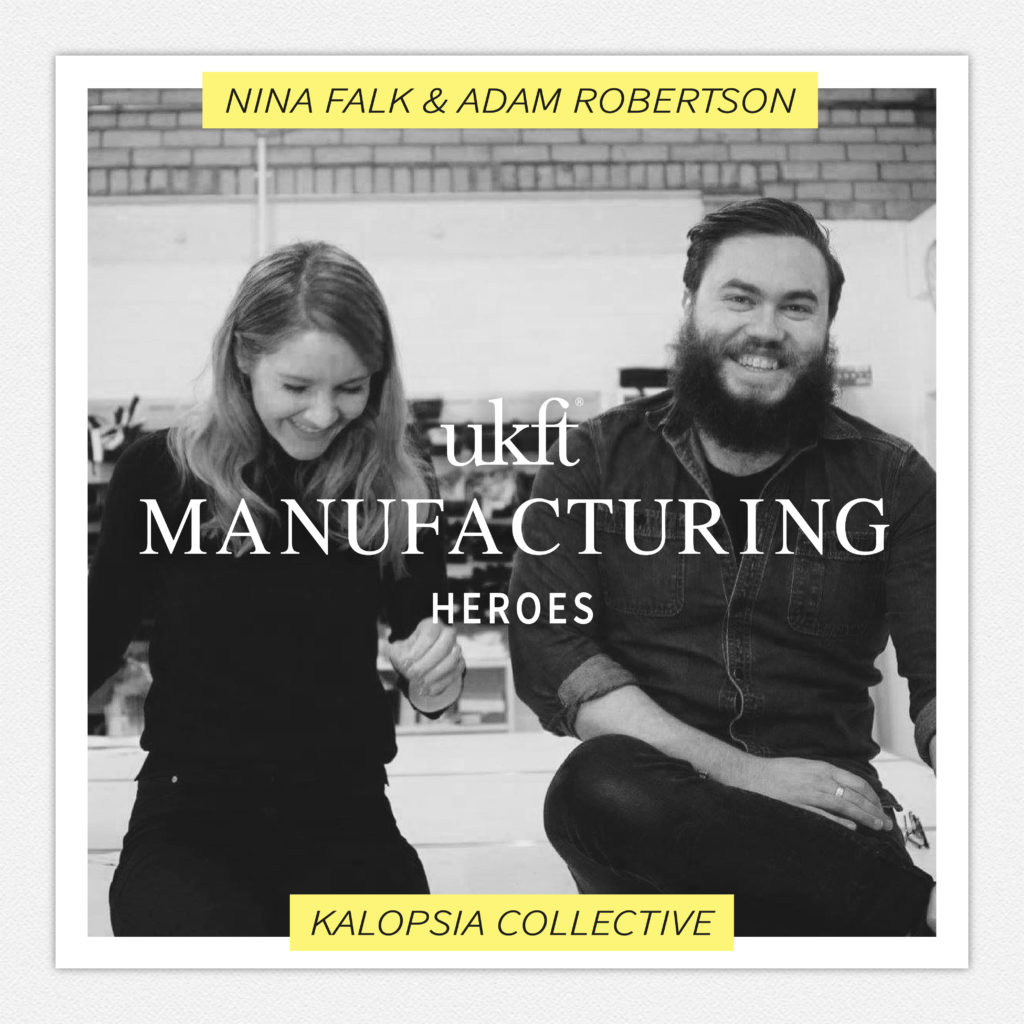 Kalopsia Collective is a registered social enterprise operating as a textiles product manufacturer in Leith, just north of central Edinburgh. The company’s standardised product collection Assemble has been a huge success for Kalopsia but manufacturing is far from what the collective was originally set out to do.

“It has been an odd journey as we originally started making highly conceptual textiles but not getting much recognition as textiles were always seen as quite crafty, which we found frustrating,” says Adam. “We chose the name Kalopsia with the notion of things being more beautiful than they are as a joke but it stuck.

“We started the collective to show the work of textiles and then were contacted by someone from our local shopping centre in Edinburgh who wanted us to turn empty shop units into gallery spaces. We spent three years doing that and also became artists in residence for the shopping centre – we were the first to do that in the UK.

“We had a tiny little office in the shopping centre, a windowless back room, which is where we started manufacturing,” says Nina, who had previously trained as a tailor in Stockholm, Sweden. “We made bags for galleries we worked with and kept getting orders through the various exhibitions.” 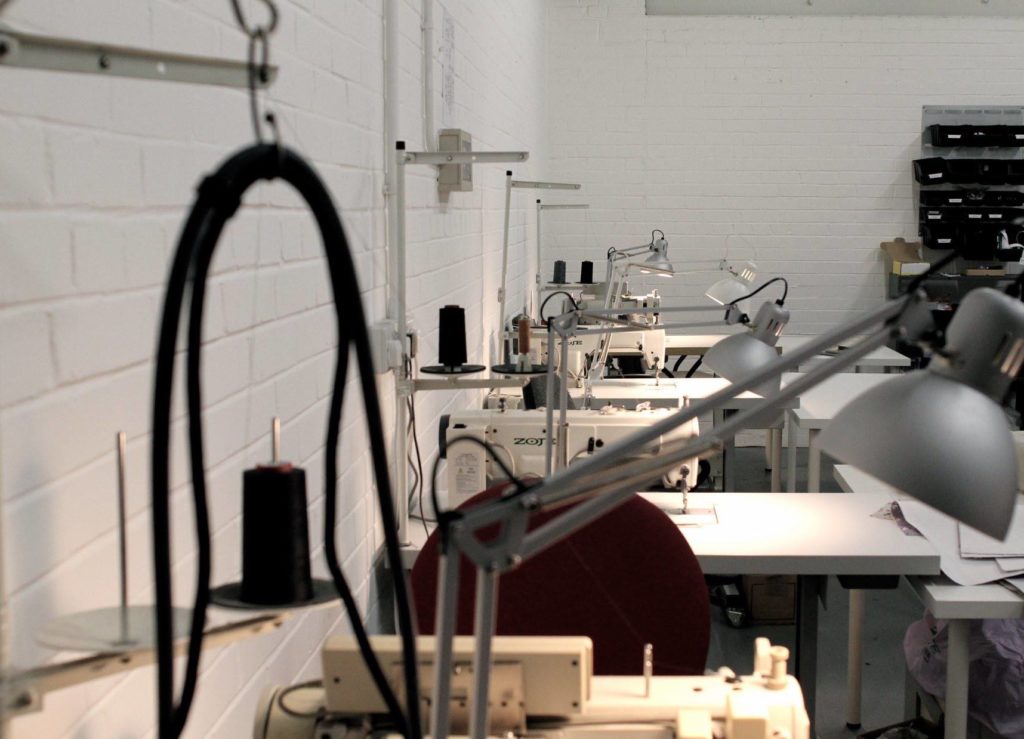 Manufacturing was a small part of the business at first, but they quickly found it was something that worked and there was demand for. They began to focus on offering an efficient service that was easy to use.

“Manufacturing can often be expensive, long winded and time consuming,”says Nina. “We found that many of the brands and companies we were dealing with all wanted similar products and individually would end up spending six months developing a cushion cover. Our ‘Assemble’ model grew out of that.”

Adam explains: “We started looking at what people wanted and needed, and Nina would design a pattern that would work. As we went from a gallery to a shop to a manufacturer, we had been in the footsteps of our customers so we understood the process. We also kept a commercial focus. If our client could sell the product, that meant we could make more, which kept the whole thing moving. We offer such low minimums so we can make it as easy as possible too.

“I often use the example of business cards. You can go somewhere like Moo where the templates are all set up and the process is really simple so you know what to expect. But there wasn’t really anything like that for fashion and textiles.” 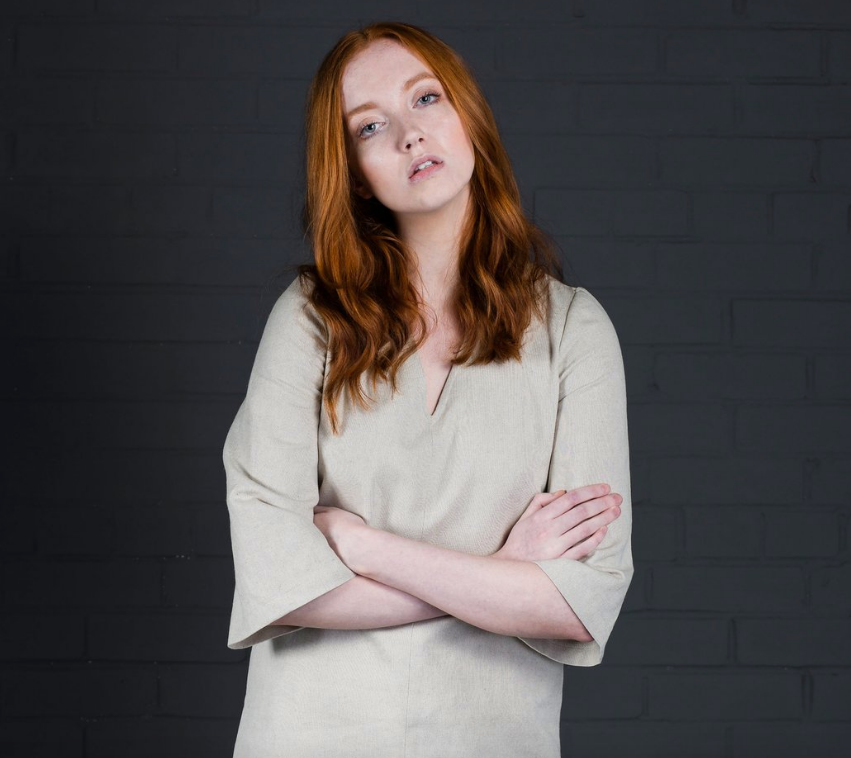 Nina says: “When I first trained as a tailor about 17 years ago in Stockholm, one of the things that I found most exciting was how to make a product easily and simply but by being creative through the use of fabric. This is something we wanted to take through to our business.

“We also had to make it so our machinists were happy to make each product and that you can both assemble it and disassemble. You need to be able to take it apart and fix it if something went wrong. We aspired to making simple, clean products.

“We kept the Assemble product shapes simple, bold and timeless so that our clients’ fabrics would be the thing that really stands out and gives the product its identity and uniqueness.” 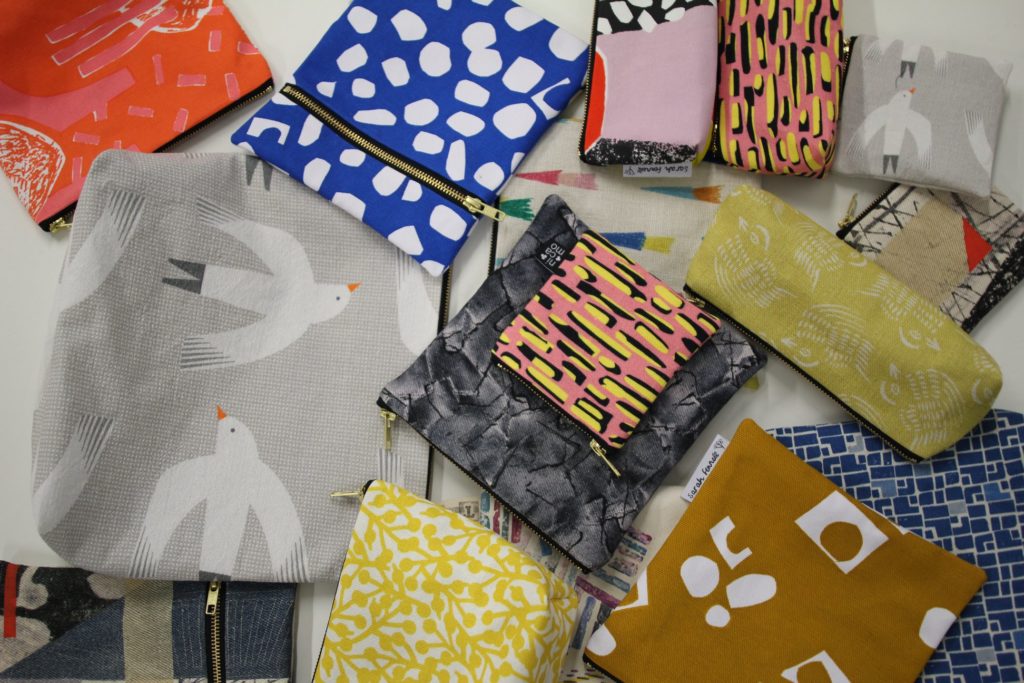 Kalopisa originally offered accessories and bags but began widening the offer to include clothing. The range has expanded over the years as new products have been added.

“If we get multiple requests for products, we then look at how we can make those in a simple yet efficient way,” says Adam. “The range has also got deeper in terms of customisation options.

“The system works because there is never a product that someone in our team doesn’t know how to make. It sounds straightforward but it is hard to do something simple well. That is something Nina is really good at.” 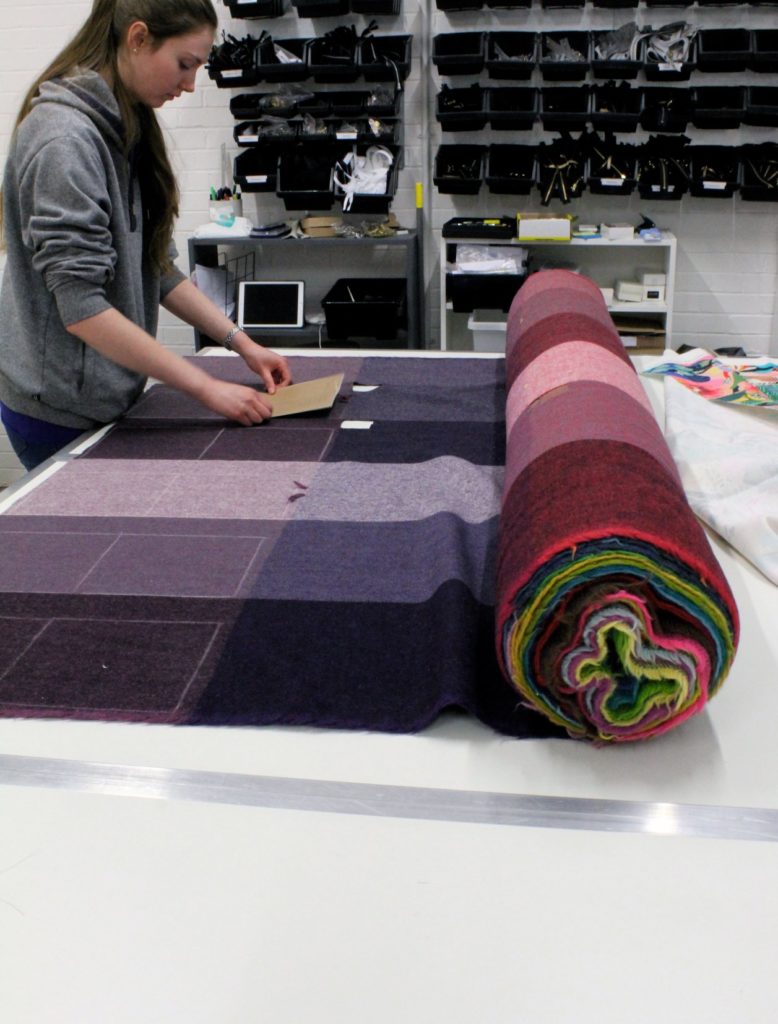 Kalopsia has been growing steadily over the last few years and even managed to grow in 2020, although not by as much as previously forecast. The current challenging circumstances has meant the team has shrunk from seven to four (two employees plus Nina and Adam) but will look to increase again as the industry begins to stabilise.

Adam and Nina pride themselves on both being able to do most of the roles in the company but Adam tends to focus on the marketing and operations, while Nina handles more of the product development and production. 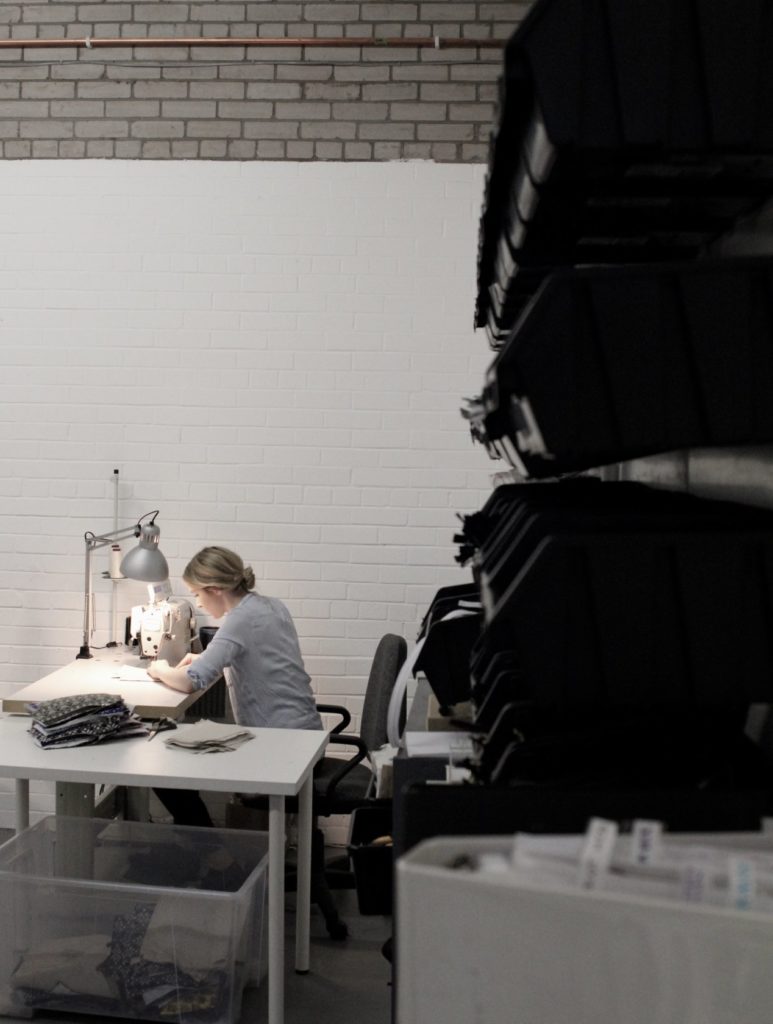 “We both do some of the sales, depending on the client and what they are looking for,” says Adam. “But we both want to be part of everything we do.”

Kalopsia works with a variety of brands and partners at different stages of their journey, with clients including Kitty McCall, Kestin Hare, Bute, Prickly Thistle, Woolly Originals and Wallace Sewell. Clients will supply their fabrics and Kalopsia can turn them into products.

“As long as the fabrics are bigger than the pattern piece, we can normally work with that,” explains Adam. “A lot of our larger clients use seconds and offcuts. For example, it could be an end of line fabric that we could transform into a washbag.”

Unlike many manufacturers, Kalopsia has a comprehensive transactional website complete with transparent pricing and is very active on social media.

Adam says: “We just wanted to make the experience of ordering easy for buyers. Sometimes people get confused because of how easy it is and how straightforward. There is a notion that working with a manufacturer has to be difficult.” 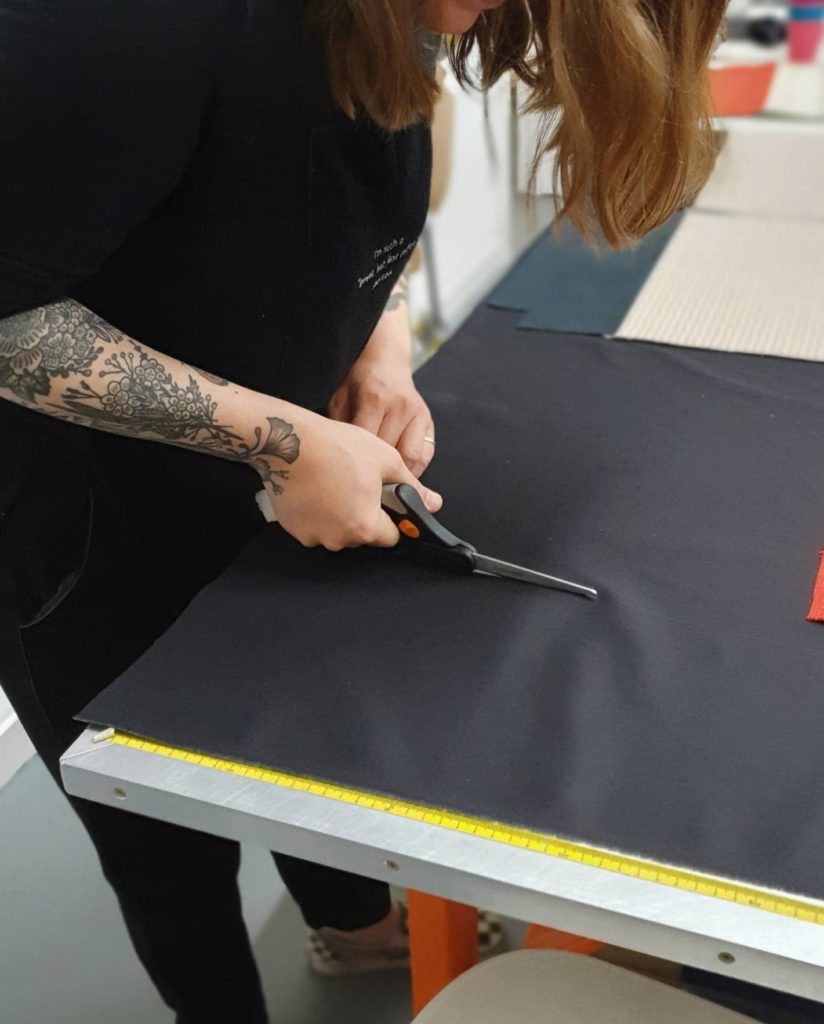 “Having the pricing set out definitely helps to make the process easier because all the information is there,” he explains. “Sometimes people can find approaching a manufacturer quite daunting too so we find that makes us a bit more approachable.

“We know that we’re not going to be the cheapest manufacturer out there because we want to do things ethically and pay fair wages but we can offer a quality product with hopefully, a really simple process and great service.

“Our long term goal is where brand and manufacturer are both known to the customer. We’re a bit of a way off that now but we’re proud to be make things ethically in Scotland and our clients are too.” 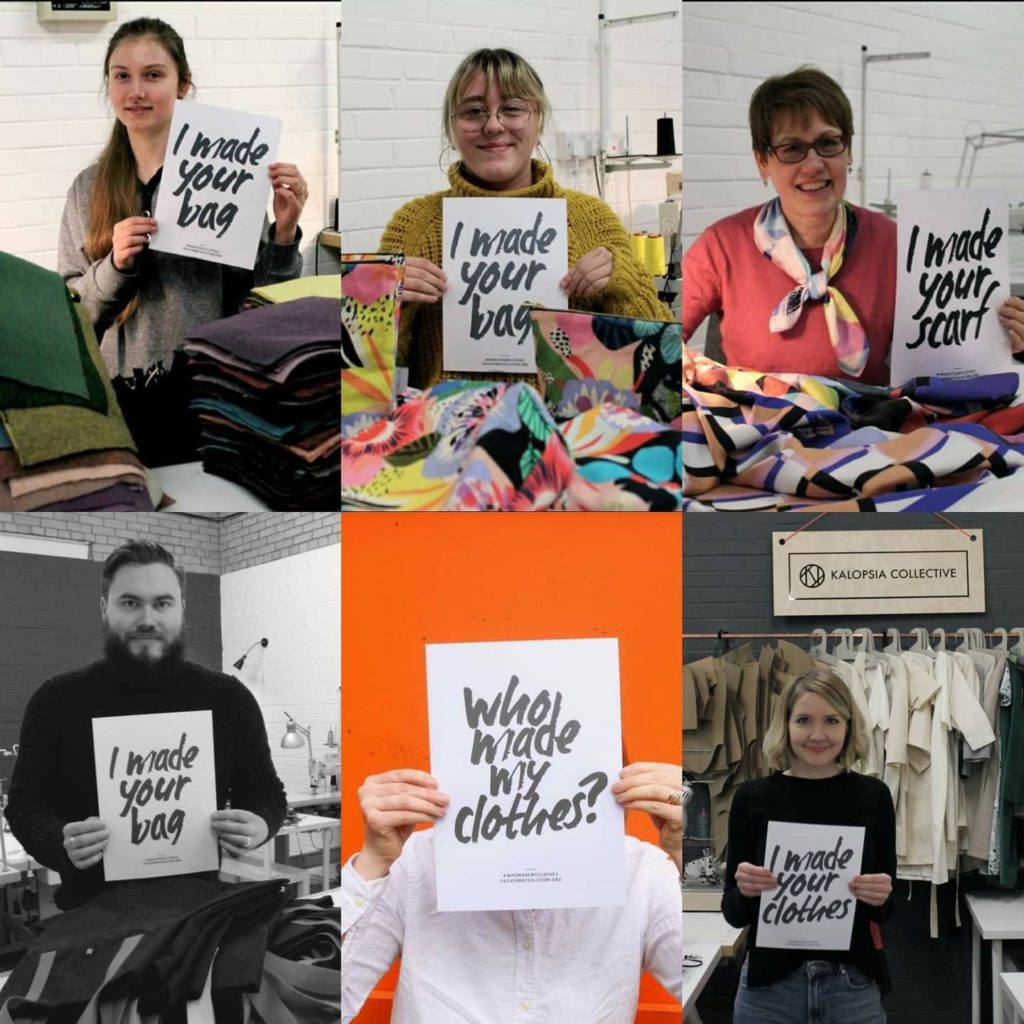 “It’s important to us to show people making things and showing that it happens here in Scotland. We’re really passionate about the process of products being made,” he concludes.