Lee Dawson is the Managing Director of Samuel Brothers, a bespoke uniform tailor founded in 1830, which he bought 13 years ago following a career in the military. He is passionate about building on the UK’s reputation for manufacturing quality and service around the world, as well as ensuring future generations have the opportunity to learn tailoring skills. 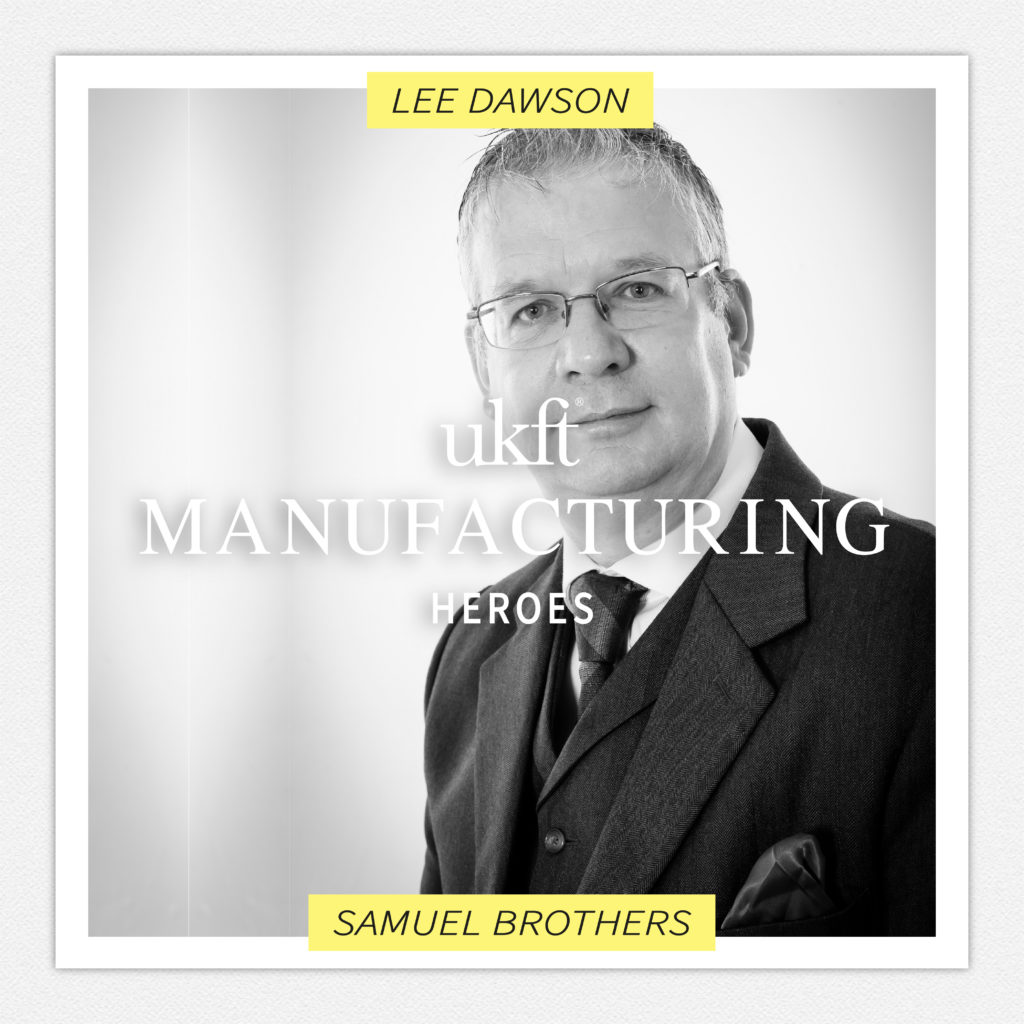 Lee Dawson had a steep learning curve with a great deal to learn about the tailoring business when the opportunity arose to buy Samuel Brothers (St Paul’s) but he understood the military client and what their expectations would be in buying the uniform. He used to buy military uniforms from the company within his role during a period in his career in the military and it seemed a fitting opportunity when he left the army to take up the role of managing director, after an invitation from his predecessor.

“Up until that point, I had worn lots of uniforms, sewed on a few buttons and darned a few socks,” he explains. “But I saw a business opportunity and thought I know the customer and I know the uniform, the rest I am sure can learn. I did underestimate however just how much there was to learn. It was a great company and I just felt it was a good match.” 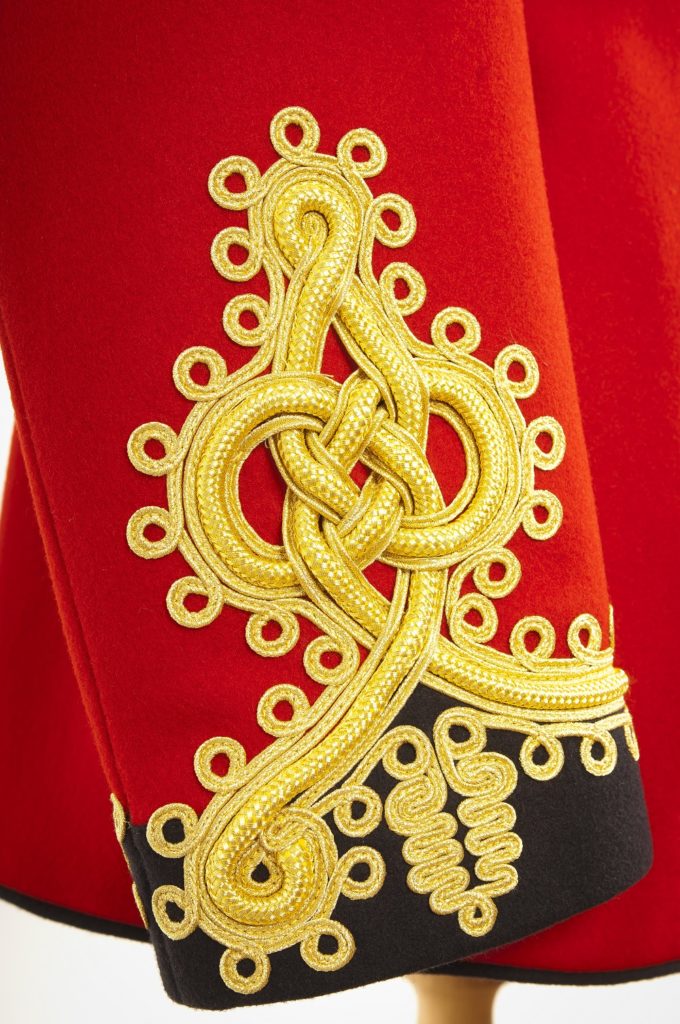 Samuel Brothers was originally established in 1830 in London, and at one point had four factories located in London, producing and shipping livery as far afield as the White House in Washington. At the turn of the last century, Samuel Brothers was reputed to have been one of the largest exporters of uniforms in Europe.

When the First World War broke out, the company focused on military and was commissioned by the War Office to produce a waterproof coat for Officers of the British Army. 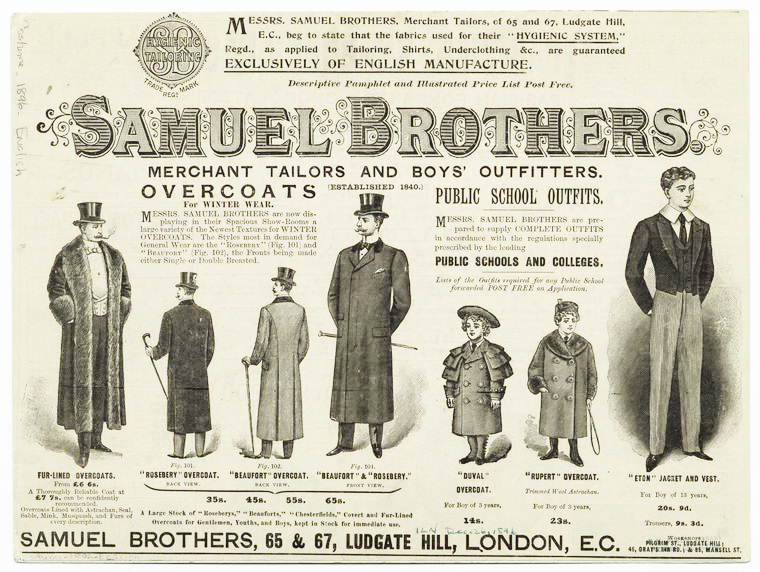 “The company once employed hundreds of sewing machinists in a number of factories, but naturally today on a very much smaller scale. Nevertheless, we have grown in the last 13 years and we were honoured to be appointed with a Royal Warrant as Tailors to HM The Queen in 2017.

“We have a simple philosophy, if you make a good product and people like you because they are happy with what they buy, accompanied with a first-class service, then they will continue to shop to shop with you.

“We are known for looking after our customers and being a nice place to shop and we’ve never really needed to advertise as customers have remained loyal.”

Lee quickly got stuck into learning the fine details of tailoring.

“I am so lucky to work and meet true talent which still and continues to inspire me.”

He believes his years in the army served him well in how to lead the company.

“The army is all about leadership,” he says. “You can’t lead unless there is mutual respect. It is almost impossible to run an organisation unless you understand the roles and responsibilities of your staff, this you must learn, but you also have to believe in your own ability and make tough decisions along with the responsibility that goes with it.  If you have good staff who believe in the business, then things will always work out.

“I was fortunate to buy a company that already had a good reputation, and as they say if it isn’t broken then why fix it. My responsibility is to look after the business that feeds us all, until it is time to hand over to a successor.”

“One of the biggest challenges is that everything around you is changing at a rate of knots, there is a temptation to go with the flow but sometimes you have to buck the trend and decide that you’re not going to compromise, not going to buy cheaper cloth and trim but remain loyal to UK suppliers. We have a commitment in supporting the UK Industry which I strongly believe in, despite continual market pressures, which does cost us (as a company) as we cannot compete with offshore price points.

“You have to believe in what you’re doing and it’s not just about addressing quick wins, it’s about the long-term sustainable strategy and growth.” 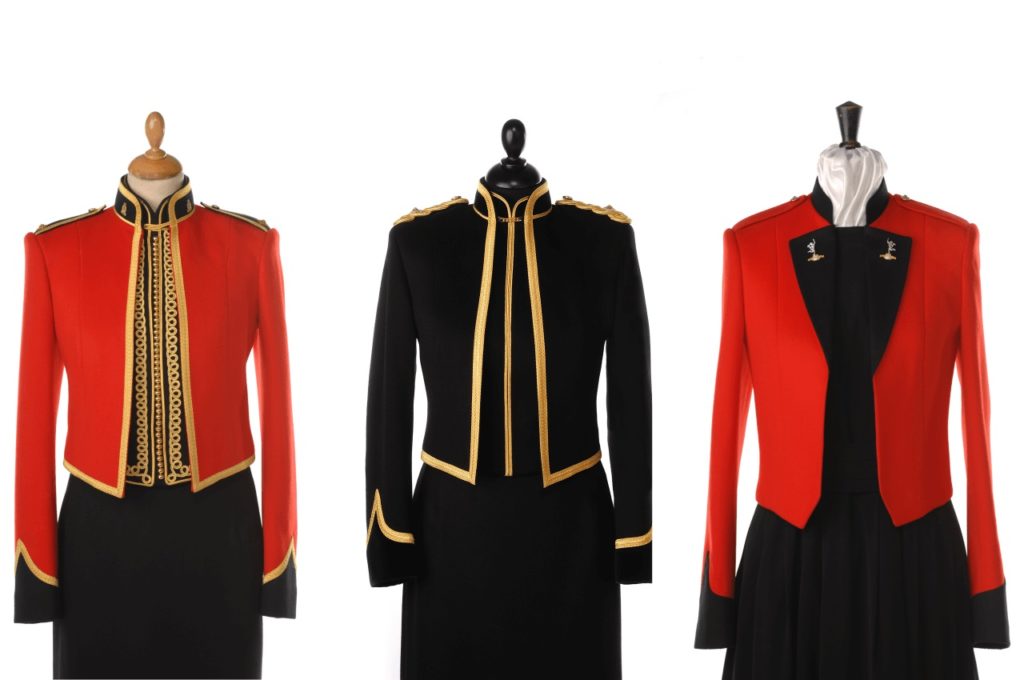 Lee says he is learning all the time and each day brings new challenges, some of which he secretly enjoys.

“You’re only as good as the last coat you made,” he says. “It’s all very well focusing on five-year plans but you must keep your eye on on what you’re doing on a day-to-day basis.”

A normal week will see him meeting customers, conducting fittings during the week then tending to the duties of a managing director at the weekend. But he is also considering the bigger picture, in ensuring the company and the wider industry have skills and resources required for the future.

“It’s a great little company that punches well above its weight. We produce uniforms for Private Soldiers all the way through to tailoring for Heads of State and the Royal Household. We also supply uniforms for UK Emergency Services, the Ministry of Defence, and we also export uniforms to the Commonwealth.” 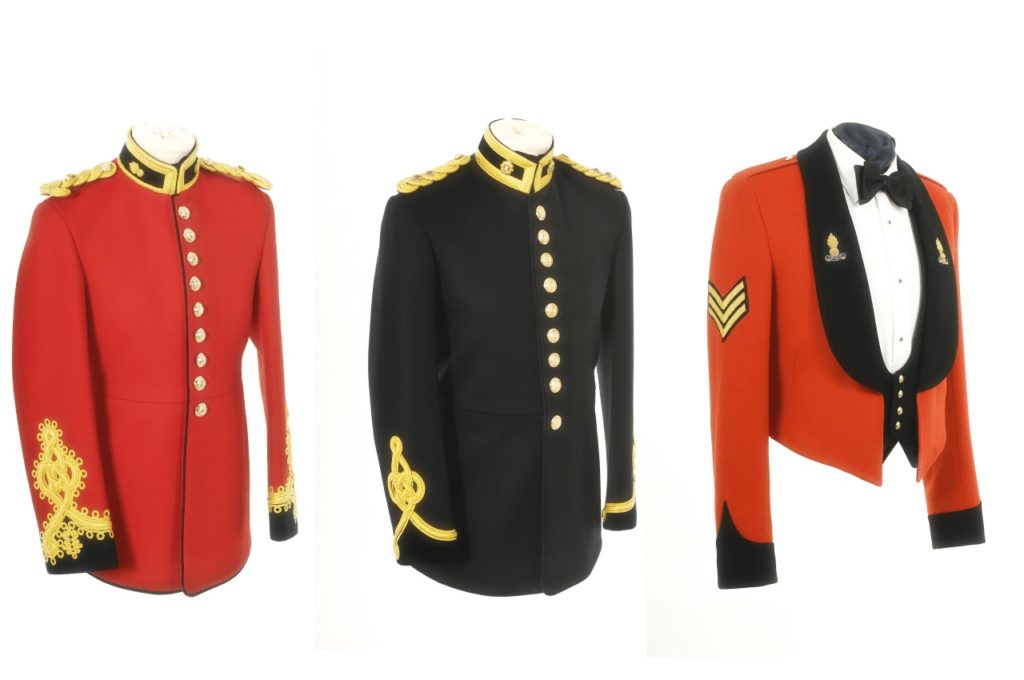 Around four years ago, Lee embarked on a deliberate export strategy for expansion. The company now has established thriving exports in the Caribbean and Commonwealth.

“Our business has gone through two World Wars, we had a direct hit in the blitz where our main factory was destroyed, but here we are almost 12 months into a pandemic in 2021 and the company is probably experiencing its most challenging period in its 190 year history. We’ve always managed to keep things going and I believe firmly we will this time, but what it has done is made us really focus on is the risks we have in the business, whereby we have asked questions of ourselves and what lessons can we learn? I had a feeling 10 years ago that we would experience further impacting market changes, which is why we really started to focus on exports four years ago. Our traditional home market had shrunk, from corporate buyers and public authorities.

“The Export and the Commonwealth market is important business for us for the future, and has been a blessing during the pandemic. I would encourage anyone in our field to explore exporting if they have a niche business. We found we simply had all our eggs in one basket, which is not a great business model.” 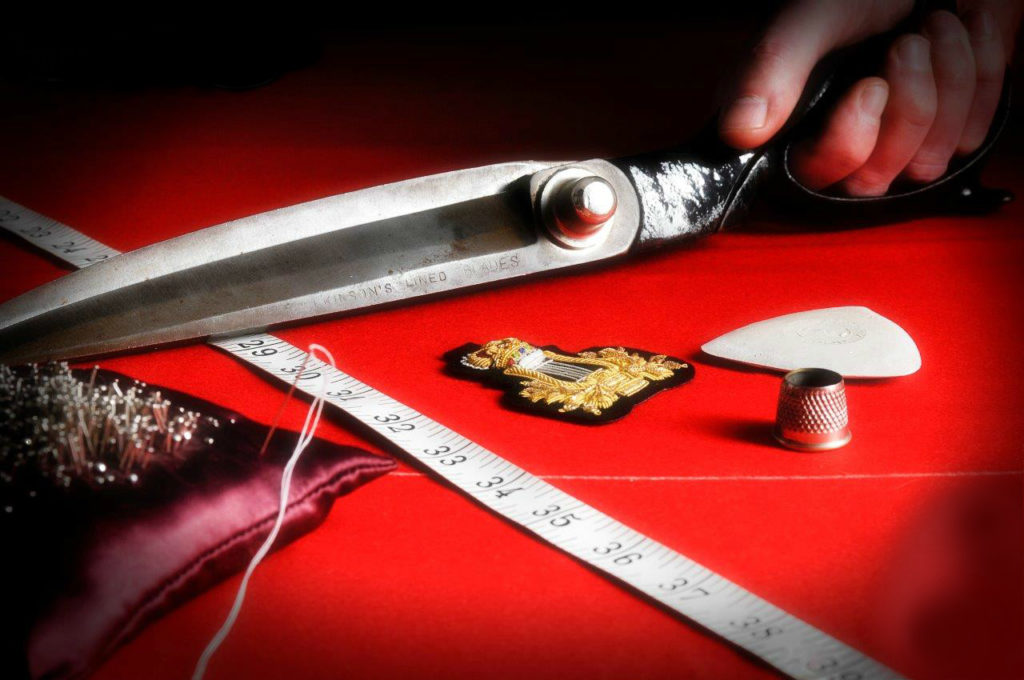 Lee believes there is a revival of ‘Made in Britain’ that is not just down to quality production of UK Companies but also the service that goes with it.

“I’m a real believer in a rising tide raises all ships. For us, we are a high-end bespoke manufacturer and by choice, I want to shop from the UK because I want to keep both the button maker or the small trim merchant open. We’re part of their business, that they depend on. I feel a responsibility that it’s not just us, it’s the whole supply chain that we must support otherwise we lose it, not just temporarily but forever. This may seem romantic but COVID has taught us some serious lessons about delicate and fragile supply chains.

“The wider we cast this net, the safer it will be for all of us and we need to remember that it’s not always about just the bottom line. It’s very easy for buyers to offshore, you drive unemployment, lose machinery, companies and the associated skillset, which for us in niche textiles is a tragedy. The Government should consider supporting the SME more and not make it so difficult for companies to engage. Take the focus off the numbers for a second and investigate the true impact for UK SME’s in awarding contracts.

“There is some revival of UK manufacturing in the clothing industry, which is great, and we need to capture that but it’s also like recruiting versus retaining staff. You need to look after what we already have and protect that, rather than just throwing money at loads of start-ups. If you have companies out there that are flying the flag for UK PLC, then help them to keep doing that.”

Lee is a big believer in community and working together in the industry to improve things for everyone. He also thinks there are new opportunities in making more sustainable decisions and educating end consumers. 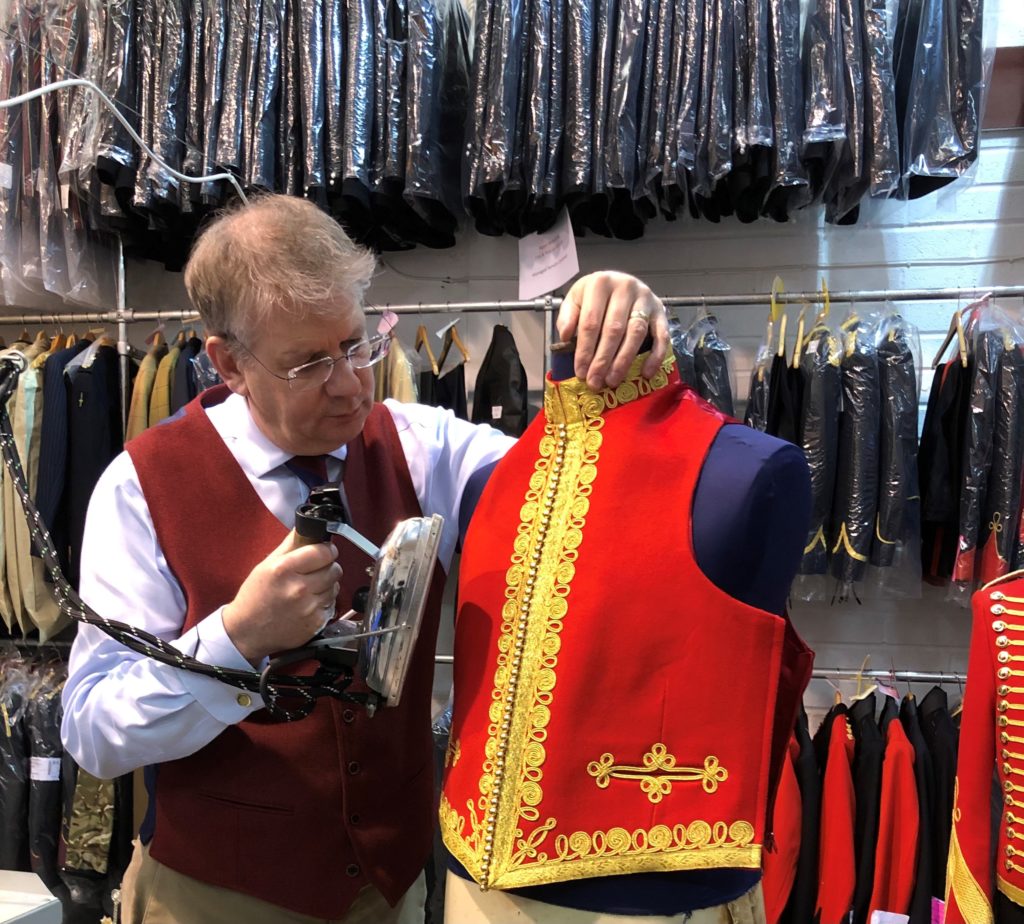 “Education is a big piece of my role,” he says. “Customers ask about prices but our role is to make them understand the time and effort that goes into arriving at those prices. It’s not just about selling a suit; it’s about selling the process and skills that goes into that suit.”

“For example, I believe that if you buy (on behalf of the public sector); there is a corporate responsibility for those public funds. In the current economic climate organisations are fixated on price and perhaps rightly so, but there is a lack of real understanding, that you get what you pay for. It could be that a garment is purchased within budget and should last two years as opposed to perhaps spending a little more with a quality product made, whereby the shelf life is extended to four years for example, so it is about educating buyers, which is a challenge in itself.”

He is also passionate about the importance of learning practical skills and wants to encourage young people to learn tailoring or take up an apprenticeship. He believes that succession for all of us is critical. It is for this reason that Lee volunteered and became an End Point Assessor (EPA) for the Level 5 Bespoke Tailoring Apprenticeship, after undertaking a piece of work with UKFT and looking into the existing standards through a trailblazer group with colleagues from across the sector.

He is concerned about the impact of the pandemic on those currently studying and the jobs available to them in the immediate term, but also for the wider industry, especially those in bespoke.

“In our industry, we have highly skilled staff who have a skillset that you can’t just replace. What concerns me is they might be thinking that if a further pandemic were to strike, whether the trade could sustain further losses. Our industry already has a skillset problem which could further be exasperated. We must be mindful of the impact of that in the widest sense.

“The pandemic will come to a manageable conclusion in the near future. I speak to lots of fellow companies some who have struggled, whilst some have managed to do well and even prosper.”

“We need to connect more as an industry – through networks like UKFT – because it is good to share experiences. Maybe it might bring some ideas, maybe some opportunities. I firmly believe there will be opportunities ahead and we will return to ‘business as usual’, but we just need to get over this final hurdle now.”