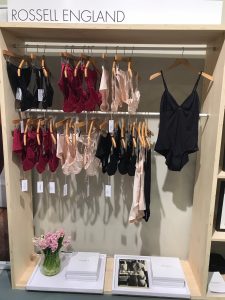 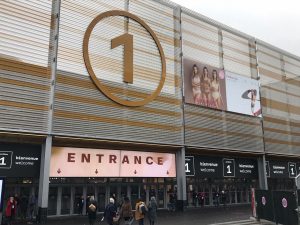 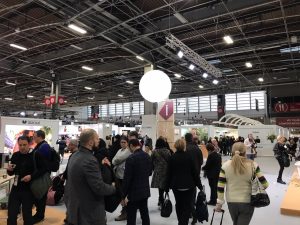 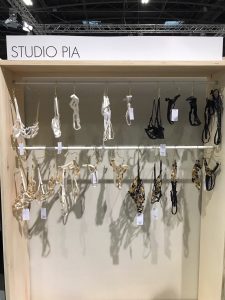 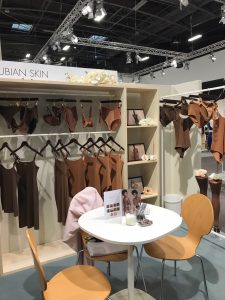 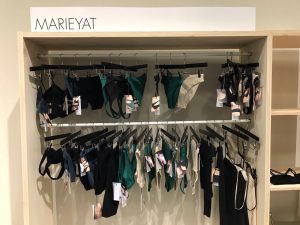 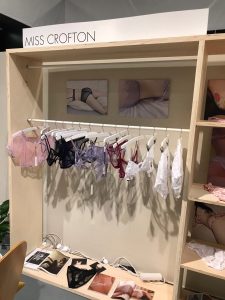 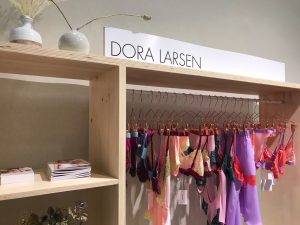 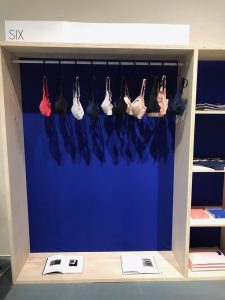 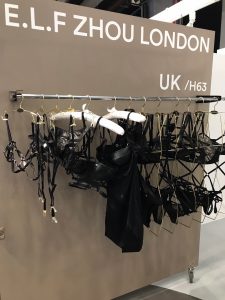 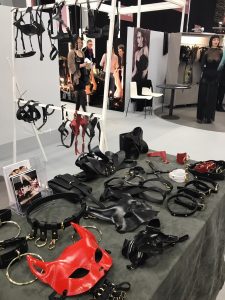 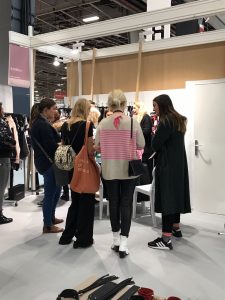 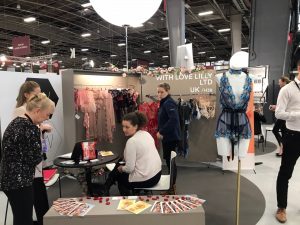 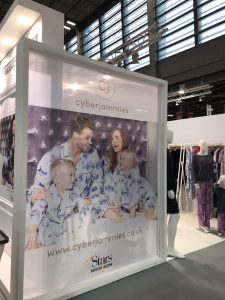 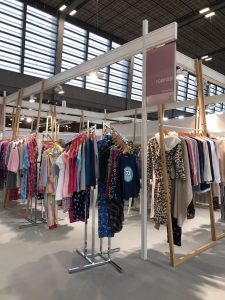 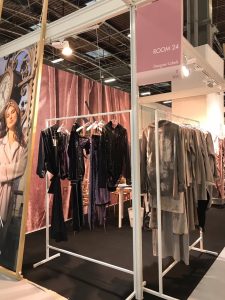 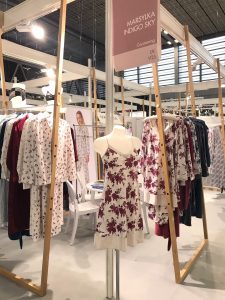 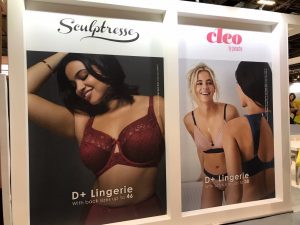 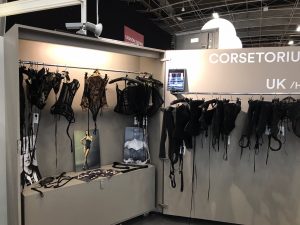 Report by Paul Alger and Martial Ramage at UKFT

The Salon International de la Lingerie, organised by Eurovet, remains the world’s largest lingerie, loungewear, sleepwear and resort trade fair. It takes place in January each year alongside Who’s Next Paris at the Porte de Versailles. It is without doubt the main industry event for the lingerie sector. Even if its sister event for swimwear and beachwear, Unique by Mode City, has lost some brands to showrooms in the centre of town, this trend has not generally affected the Salon.

According to the organisers’ official figures, the show registered a 10% year on year drop in the number of visitors. This was generally regarded as being in line with expectations. As with ready to wear, there has been a decrease in the number of standalone lingerie boutiques and increasing competition from online stores although much of this has been around larger brands. The attendance will almost certainly also have been affected by the Gilets Jaunes which led many French stores to stay close to home on Saturday and some Asian buyers to stay away altogether.

In order of importance, the top ten markets were: France, Germany, Italy, Belgium, Russia, Spain, Netherlands, UK, Japan and the US. It was especially interesting to see a moderate but noticeable resurgence of buyers from Russia and Ukraine. The organisers explained this as a result of their Paris-Moscoù Express dating service but another reason is likely to be the cancellation of Eurovet’s Mode Lingerie show in Moscow.

At Interfilière, the neighbouring lingerie fabrics and trimmings show, the same markets dominated but in a different order: France, Italy, the UK, Germany, Spain, US, Belgium, Netherlands, Japan and Russia.

Overall the visitor breakdown was 36% France and 64% international.

There were 15 grant supported companies showing with UKFT and the British group as a whole totalled 50 designer and classic brands.

This year’s show was well laid out with the beautifully curated “Exposed” section for younger luxury lingerie brands being particularly popular with buyers and press. Exhibitors in the main part of the hall were divided between the smaller designer pods, always popular with emerging designer brands and the main part of the show with a heady mixture of own-build and organiser shell stands. Within the main show, there are zones for lingerie and foundationwear, “cocooning” loungewear and sleepwear and, this season, a larger than usual display of men’s lingerie.

As with any show, there is always room for improvement and the general feeling from more established British exhibitors is that the show urgently needs a revamp and new investment to keep larger brands and stores involved. The organisers’ shell stands, which were a source of disappointment when they were launched three years ago, are well past their sell-by date, leading a number of companies such as Panache to invest in an own-build stand.

The other major issue this season was heat – or rather the lack of it! Exhibitors and buyers have always complained that Hall 1 has no air conditioning for Unique by Mode City in July but the heating also still appears to be inadequate for even the mildest January. UKFT has been involved with groups and shows in this hall for over 30 years – the heating and air-conditioning have always been inadequate but exhibitors still pay the same price per square metre as companies showing in more temperate halls. The issue is all the more damaging for lingerie brands as their models are required to show their lingerie collections to their best advantage, but many were reduced to wearing dressing gowns and outdoor coats to keep warm. There were numerous complaints from buyers too as none of us are getting any younger!

British exhibitors are also regularly astounded at the lack of good food and refreshment/seating areas in most Paris Expo venues. The areas were rare, tables dirty and the products on sale uninspiring and over-priced. In short, there was no sign of la gastronomie française!

This season, the British group was slightly smaller than usual. One reason was a change (or rather a tightening up) of the organisers’ pricing policy on the smaller designer pods which make up half the group. This change resulted in some companies facing substantially increased costs after their 5th season. This was an important factor when brands were considering how to spend their promotion budgets, especially in a season already predicted to be difficult due to Brexit. A number of more established brands decided to cut back on tradeshow expenditure for this reason and due to concerns over Brexit as buyers were expected to be hesitant about committing to orders until they knew what was happening.

In a more upbeat mood, Nick Moore, MD of Pongees was proudly flying the flag with a Union Jack fashioned out of eau de nil and duck egg silk and reported good business at the show: “Exhibiting regularly at Interfilière has definitely helped boost our export sales to lingerie designers from all over Europe. As we have stock of all our silk fabrics we can fulfil an order within days and our minimums are low, which are strong selling points. As with fashion designers, lingerie specialists are increasingly looking to source smaller quantities for sampling and bespoke orders and are often working up against short deadlines.”

Overall, buyer traffic was generally good although the show felt quieter than usual.  There were times when the show had a buzz about it, especially as the Russians and Ukrainians walked the show, but the show generally felt quieter. It was clear that buyers were not as upbeat as they had been in 2018 but that they were still looking for new collections and products.

Commenting on the look, feel and temperature of the show overall, Russell Gotkine representing Marsylka summed up the views of other British exhibitors: “We saw a reasonable number of quality buyers from the USA, Australia, New Zealand, the Middle East and the EU and they loved our collection but we received a lot of complaints from buyers about the cold. Buyers often stayed shorter than usual as they were too cold to sit and talk. I am sure we would have done more business if the temperature had been right”.

In spite of these irritants, the British exhibitors were fairly pleased with the show, especially those showing in “Exposed”. The vast majority of British businesses said they had been asked about the impact of Brexit on their supply chain but most had followed UKFT’s advice to offer Euro pricing for EU buyers and to offer to absorb any additional costs associated with Brexit for the first season at least.

Exhibitors were also pleased with the organisers’ e-ticket scheme to invite key buyers to the show free of charge. This is a major step forward as larger trade shows are finding they lose buyers to showrooms and other locations when they are charged to come and place their business at the show.

Paul Alger, director of International business at UKFT, said: “UKFT has always campaigned against charging wholesale buyers to enter and spend their budgets at Parisian tradeshows. There is a lot more competition now, in Paris and in other cities and, if Paris is to maintain its leading role, Paris Expo and tradeshow organisers must find a way to remove entrance fees and reduce show costs. This is an overdue move in the right direction but much more needs to be done as other cities look after buyers and exhibitors much better!”

Some of the smaller brands at the show are finding it increasingly difficult to break into the market but recognize that Salon de la Lingerie is the most important international lingerie show. Many of them saw department stores, independent retailers and, increasingly, online market places which use the show to source and identify new talents and suppliers.

Hoda from Diamony said: “We were thrilled to have been awarded a DIT grant by UKFT. Young companies like ours really need to feel that we are being supported. Although the buyer attendance was affected by the Gilets Jaunes and most of the Europeans were extremely cautious about Brexit, we did see some great buyers which were at the right level for our collection.”

Paul Alger summed up saying: “Considering the challenges we face this year, the Salon de la Lingerie has performed reasonably well. Our designers in “Exposed” especially so. But the lingerie market is changing in similar ways to ready-to-wear and Paris needs to work much harder to maintain its reputation as Capitale de la mode et de la lingerie”.

On a more positive note he added: “We are all mightily relieved to see the Russians and Ukrainians back at Salon as they are a major power-house in the lingerie market!”